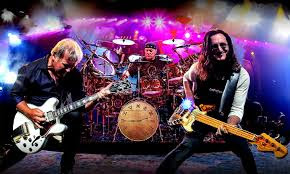 I usually claim I cut the cord on cable TV because all I need it for is sports. That's only kind of true. Sling TV is a replacement for cable because it has ESPN and a bunch of sports channels, but it also has AXS TV. The music channel has a bunch of great shows, but Classic Albums is really hitting the sweet spot on the VHS rockumentary vibe.

The Frank Zappa show, like all of them, takes you behind the scenes for the making of the music. It's great, and convinced me I need to finally dig deeper on my Zappa collection beyond "Big Leg Emma" and the few others that I keep going back to.

But the Rush episode is the latest I watched. The show covers the self-titled first release with John Rutsey on drums pre-Neil Peart, and runs through Fly By Night and Caress of Steel before getting to the meat of the show, a focus on 2112 and Moving Pictures.

2112 is no doubt the most classic of Rush's albums, especially because it doesn't have a lacking moment anywhere throughout, unlike every other Rush album. Further, the Canadians may be rock's greatest sci-fi band of all time. Peart's lyrics were almost always based off science fiction, not least 2112 and its Ayn Rand fixation.

I wanted to rank Rush's albums here, but the aforementioned imperfections of nearly every album matched with the unfailing moments of pure brilliance on just about every release make that difficult. I'll just venture:

Really Great
Rush (not as critically loved because it's Rutsey instead of Peart, but I love it)