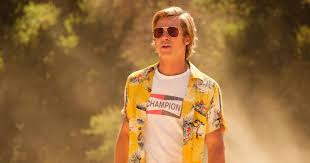 In looking back at all times I've mentioned Brad Pitt on this website, it's amazing how many great films he's almost been in. That said, after seeing two Pitt classics over the past several days - Once Upon a Time in Hollywood and Moneyball - it's amazing just how many classics in which he has accepted roles.

Hard to believe he's now been acting in movies for about 30 years and, with that output, there's a good chance I'm missing something here. But these are my favorite BP roles. In my top three, he is just about the coolest actor around (right up there beside George Clooney):

1. Fight Club
2. Once Upon a Time in Hollywood
3. Ocean's Eleven
4. (Tie) 12 Years a Slave and True Romance (maybe both better than all these above it, but Pitt's roles are supporting ones)
5. Moneyball
6. Inglorious Basterds
7. Seven
8. The Departed
9. Interview With the Vampire
10. A River Runs Through It
11. The Curious Case of Benjamin Button
12. Kalifornia
13. Ocean's Twelve
14. Burn After Reading
15. The Big Short
16. Killing Them Softly
17. Snatch
18. Confessions of a Dangerous Mind
19. The Tree of Life (yuck)

Ones I still should see: