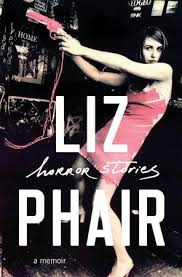 Liz Phair is definitely one of my favorite 10 things about 1990s' rock. And that’s saying a lot, since those were the formative years when I was ages 20 to 30. She produced at least three of the decade’s great albums before falling off a cliff into Top 40 trash pop.

So Horror Stories is definitely a book I looked forward to for understanding how some of that magic emanated out of Chicago’s Wicker Park, where I spent a small amount of time myself in that long-ago decade.

Phair starts off defining that her book is not so much her personal story as it is a series of little horror stories that make up and can define a life, which sounds promising because that’s a good way of describing what her best songs are like.

One such story begins the book. It’s a memory she has from college when lots of girls discover another girl, passed out so drunkenly in a bathroom that she has soiled herself and the floor. Nobody does anything about the poor girl and that flash of lacking empathy still haunts Phair. It’s really not much of a story. We don’t find out if the girl died or what ever happened to her or even who she is.

The next story starts very slowly and builds to make a case for Phair’s maternal senses. She wishes she would have adopted a lonely dog on Mulholland Drive in L.A. and she wishes she would have saved a little boy being beaten by his rotten father on a beach while helplessly watching from a far-off cliff above. The moment of the beating is when the story takes on poignancy.

These sorts of stories seem a little like a cop out. Anybody who’s a halfway decent writer could jam out several little vignettes or memories of their past just like these ones. It’s kind of what a life, any life, really is. The difference that makes the book worth reading is that they are Phair’s stories. It further helps that she is an artist who has always been wrapped in quite a bit of mystery, leaving her fans to cobble together her story based solely on her lyrics, which are mostly relatively cryptic.

The opening stories are not as exciting as I had hoped. I’ve gone from wanting to buy the book to putting it on hold in my digital library queue and hoping I get more into it when it arrives. For now, there’s still always those great first three albums (Exile in Guyville, Whipsmart, and Whitechocolatespaceegg).