Debbie Downer interlude: What about the world without us? 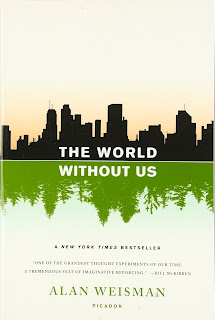 This seems like a prescient time to go back  and finish Alan Weisman's classic science  exploration The World Without us.  I didn't quite finish it when it was  released in 2007. The chapter "Where Do  We Go from Here" seemed like a good one to visit.

It begins noting when animals would  miss us, perhaps especially timely as we hear fake news reports of dolphins  having returned to the boat-less canals  of Venice. Turns out the answer is  that not many would miss us, except  for hair and body lice, and follicle mites, which are so tiny that hundreds live on our eyelashes alone. The 200  bacteria species inside of us would also  miss us.

A CDC expert featured in the book  says that threats like the SARS Coronavirus  can take out a lot of people but have  a tough time penetrating everybody, and  just having access to soap and water  can go a long way to preserving humans.  Fruit bats are suspected to be the source  of the worst viruses, which then spread  through infected human body fluids.

Some experts interviewed thought new technologies or environmental destruction are likelier sources of our demise. They also say no virus could kill all the people on earth. Even a 99.99  percent die-off would  leave hundreds of thousands of survivors. One expert points out that the one virus  that could be most successful would be  one that would make our sperm impotent.  Crisis-pregnancy centers would be the first  to notice because nobody would be visiting.

In 21 years, there would be no more  juvenile delinquency and, as resignation sets in,  spiritual awakening would replace panic. The seas and land would replenish with animal  life and forests and wetlands would come back  because of less need for new housing. We  probably wouldn't have resource conflicts and,  thus, no wars. The planet would slowly return  to the Garden of Eden.