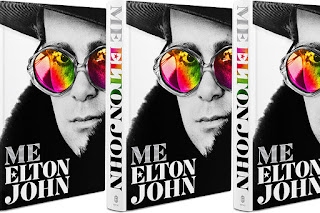 I recently wrote a review of Rocketman and a list of my favorite Elton John songs. While that movie was pretty good, I heard John's new autobiography Me is better.

So I read it an, indeed, it has lots of juicy nuggets, including:

All these tidbits and many more make for a great read for any student of rock n'roll history.
4.5 out of 5 stars
Posted by Pop Culture Lunch Box at 10:56 AM 3 comments: