Mega-stars deserve to be mega-mega stars after Ballers 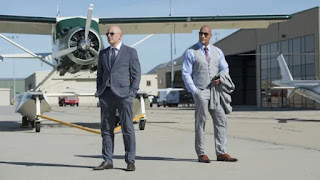 I finally finished all 5 seasons of HBO’s Ballers after watching it over the past couple of years.

I never thought it would be my bag. Too over-produced and glitzy. But, for anyone who's either a football fan or simply likes to take a dip in the glamour pool, it's perhaps an underrated gem. Once I started, it was impossible to put down.

NFL players, team owners, and mega-agents dot the story. Dwayne "The Rock" Johnson is really one of TV's most lovable and noble heroes, as ex-NFL linebacker Spencer Strasmore, determined to right the many wrongs foisted upon his battered and beaten player colleagues. I consider him one of the great anti-heroes, like Don Draper, Walter White, or Tony Soprano, but in an actually-not-evil way.

Rob Corddry plays Strasmore's buddy for life (in his post-NFL career). He's far from perfect, but his arc is extremely well written.

It’s unfortunate the movie Tenet has been hindered by the pandemic, because star John David Washington is deserving of becoming a mega-star, no matter whether that movie is any good. His performance as wide receiver Ricky Jerrett alone is worthy of Denzell's son, who actually played for the Los Angeles Rams in the 2000s, becoming a household name.

Posted by Pop Culture Lunch Box at 9:43 AM

Email ThisBlogThis!Share to TwitterShare to FacebookShare to Pinterest
Labels: TV