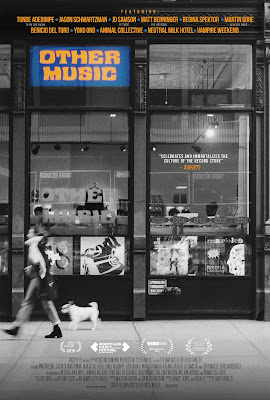 Other Music (Amazon Prime): For anyone, like me, who spent far too much time in record stores over the years, this is a must-watch documentary of the closing of a New York institution. It is so sad to see a beautiful, communal way of life ending in the U.S. 5 out of 5 stars

Sunset Strip (Amazon Prime): This one has it all for those who are infatuated with the most debaucherous part of L.A. From John Belushi and the comedy clubs to the hair metal and other music clubs and all the way back to the Rat Pack and Marilyn Monroe, the mystery of the Strip makes for a great documentary. 5 out of 5 stars

Echo in the Canyon (Netflix): Continuing my education on L.A rock history, this documentary from Jacob Dylan walks back through the history of the amazing music scene that has thrived for decades up above the Hollywood Hills in Laurel Canyon. With many greats like Beck playing the classic songs of the Mamas and Papas and Crosby, Stills, Nash and Young, the mesmerizing story is dotted with essential new performances. 5 out of 5 stars

The Beach Bum (Hulu): This Harmonie Korine-directed movie got a lot of mixed reviews, but I thought it was a pretty brilliant hoot. Matthew McConaughey turns in one of his greatest appearances as Moondog, a poet who can’t stop having a good time, surrounded by wack jobs played by Zac Efron, Snoop Dogg, Amy Adams, and others. Like Florida Man in HD. 4.5 out of 5 stars

Da Five Bloods (Netflix): A beautiful exploration of modern-day Vietnam, long after the U.S. brought death and destruction there. This Spike Lee joint tells the way-undertold story of Black vets going back to try to better understand what the hell happened to them all those years ago. It's one of the best Vietnam movies ever. 4.5 out of 5 stars

The Bee Gees: How Can You Mend a Broken Heart (HBO Max): How are there not more treatments like this of all the great rock stories that exist in the now nearly 70 year history of the art? Disco may be more fascinating to me because it happened during the years I was about 6 to 9, and I remember those as possibly the best of my life, but this Aussie band created an entire ... thing. They deserve to be rewarded for their ingenuity, and this movie is a great present for and to them. 4 out of 5 stars

The King of Staten Island (HBO Max): Pete Davidson is clearly one of the most talented members of SNL these days, but I delayed watching his star turn. I shouldn’t have. He is a remarkable lead as a loser tattoo artist who has to find his way in the world. Co-star Bill Burr is great as his fill-in firefighter/dad, and, as an aside, he also has one of the funniest podcasts in the land. 4 out of 5 stars

Between Two Ferns (Netflix): While the movie installment of this TV show lags in parts, Zack Galifianakis' interviews with celebrities throughout are worth the price of admission alone. He is a master bad interviewer, right up there with Martin Short's Jiminy Glick. 4 out of 5 stars

Jojo Rabbit (HBO Max): A quirky take on the story of a young German boy hiding a Jewish girl in his home, while he has guilty daydreams of Hitler lambasting him for his lack of being Nazi enough. A clever new telling of the horrific Holocaust. 3.5 out of 5 stars

Destination Wedding (2018): I watched this movie because I love Keanu Reeves and Winona Ryder. I didn't know they would be the only characters in it. But there is just enough witty back-and-forth to keep a minor effort interesting until the end. 3.5 out of 5 stars

Knock Knock (Netflix): Another flick I was drawn into because of Keanu, and he turns in a good performance as a family man who is a little too nice for his own good, ending up facing of pair of Manson-like breaking-in beauties. Directed by Cabin Fever and other torture-horror movie maven Eli Roth. 3 out of 5 stars

An Adam Sandler Netflix double header brought Uncut Gems (a little over-rated if you ask me) and Hubie Halloween (kind of awful but much more in the comfortable lane of Happy Gilmore) as a pair of 3 out of 5 star offerings.