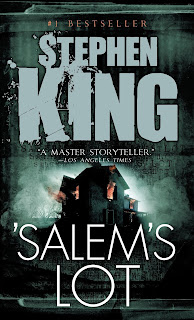 New Bonus Feature: Book of the Month (That I Read): Stephen King’s ‘Salem’s Lot, which is his second novel and one I somehow never read. I guess I thought I had because the prequel and sequel are short stories in the classic Night Shift collection. But there may not be a better vampire novel ever, Dracula included. 5 out of 5 stars

The Trial of the Chicago 7 (Netflix): Creator Aaron Sorkin simply does what more TV and movies should be doing - telling the stories that shape history. Varying peace-loving folk heroes are on trial for inciting a riot outside the 1968 Democratic National Convention in the Windy City. They fight the power surprisingly effectively. Sash Baron Cohen as Abbie Hoffman, Mark Rylance as the lawyer for the defense, and Frank Langella as the judge really shine. 4.5 out of 5 stars

Before Sunrise (HBO Max): A throwback to the 90s with Ethan Hawke and Julie Delpy, who meet on a train and spend one amazing night together in Vienna. This is not for action-flick fans, there’s non-stop pondering on the meaning of life and love, but since I may never get to visit my brother, because of COVID-19, while he lives for a while in the Austrian city, this serves as a very worthy replacement. 4 out of 5 stars 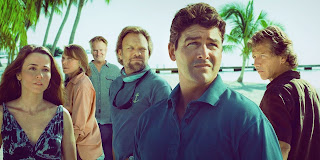 Bloodline (Netflix): The show, featuring Kyle Chandler of Friday Night Lights fame, began as potentially one of my favorite dramas ever. It sputtered in the final Season 3, which, perhaps unsurprisingly, is slow moving and a letdown probably because it was cancelled and an expected six seasons had to be wrapped up quickly. Chandler, Sissy Spacek and Ben Mendelsohn’s performances remained great to the end but were over-dramatic because of the twisted non-sensical-ness of the overall plot line. I say an Academy Award definitely goes to the setting of the Florida’s Keys. 4 out of 5 stars

Elite (Netflix): During the first season of this drama series, I couldn’t even tell it was dubbed from Spanish. Which was ok because it lent to the endearing weirdness of the psycho 90210 vibe. That first season and the second at the high school near Madrid were gripping, but by season 3, the melodrama of the endlessly deceitful and increasingly unlikeable group of friends grew tiring. 3.5 out of 5

The Little Things (HBO Max): Denzel Washington and Rami Malek are great as cops on the hunt for a serial killer in noir ‘90s Los Angeles. And the first half is very entertaining, but Jared Leto enters the film in the second half and, although he’s usually pretty good, his version of this psycho is boring, slow, and not that interesting. 3 out of 5 stars

Framing Britney Spears (Hulu): The general biographical portion of the pop star’s life is really fascinating, but then the hour-long doc focuses on her ongoing conservatorship struggles with her dad, which is certainly sad and perhaps wrong but also bordering on the technical, which seems very out of place. 3 out of 5 stars

Dr. Sleep (HBO Max): I really enjoyed this book (although that can be said by me about nearly all Stephen King books), but this follow up to The Shining just has too much going on to make it a cohesive movie. Ewan McGregor is fine as Danny Torrence, but if I hadn’t been focused on how they adapted the book, I’m not sure I could have stuck with the full 2.5-hour running time. 2.5 out of 5

Woody vs. Mia (HBO Max): I love Allen’s books and movies. Like with Michael Jackson, Bill Cosby, and others, this presents yet another artist who forces me to make a call on whether to still like someone’s art despite personal shortcomings. I’m obviously biased, but Farrow seems to hold a grudge against Woody for often choosing his art over his family. I watched the first episode but probably won’t watch the rest. 2.5 out of 5 stars