If you want to go on vacation to eat, look no further than Charleston, South Carolina. 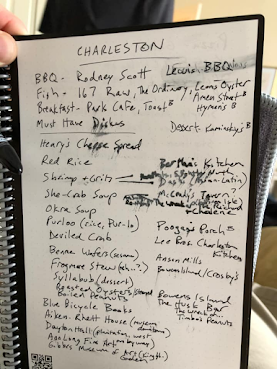 Knowing our Pandemic Spring Break 2021 could likely be mostly carry out and eating in parks or on the beaches, we were pleasantly surprised when we were able to eat comfortably for most meals on comfortably socially distanced restaurant patios in the beautiful spring weather.

See my copious and messy notes to the right from research about where and what to eat in the city. We tried to stay mostly on this plan for our five days in Charleston, but threw in a couple of unexpected surprises along the way.

Our first three nights were in downtown, and night 1 we hit Slightly North of Broad to take care of our requirement of a shrimp and grits meal. This is a must restaurant, as we sat at one of the outside tables with a yacht rock guitarist performing within earshot just inside the door. The Charleston crab soup had to make due until we could later find some she-crab soup, and it ended up probably being the best soup of the trip.

The next morning we deviated from the plan because of a coffee and smoothie bowl place within family biking distance from our AirBnB, which was located down the street from the military university The Citadel. Huriyali was so good and funky that we ate there on days 2, 4, and 5. Speaking of family, most days we filled up with two big meals and ate leftovers the rest of the time, to minimize time the kids had to sit at restaurants and to minimize our exposure to the pandemic. Day 2 was one such day, as we grabbed lunch/dinner to go from the much-hyped Hymen’s Seafood. The place was way busier than we would have risked dining at, with lines down the block, so it was nice to take it back to our place. The she-crab soup, peel-and-eat shrimp, and Wadamalaw delight (fried green tomatoes and grits) were all very good, albeit more of a touristy good than a true foodie good. 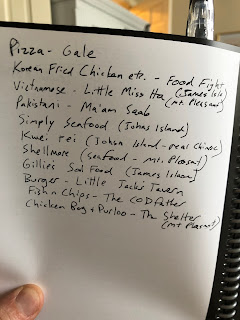 Day 3 also took us off script with a gem of a find near our place in north downtown and off the tourist track. We left the kids at home and ordered pizza for them while we went to Xiao Bao Biscuit, a hipster place in an old gas station with ample seating out front. The Japanese cabbage pancakes and spicy Thai beef were mouth watering and the fried rice peanut and caramel pork dumplings were the superstar, leaving a minty numbing of the mouth that I don’t recall ever experiencing before.

Day 4 brought about our move to a different AirBnB over in Mount Pleasant, across the bridge from downtown in an area near the beach. After a full day lounging and splashing at the beautiful, wide Sullivan’s Island beach, we headed again off script to a place recommended by friends, Fiery Ron's Home Team BBQ. It looked and smelled like something for the college spring break crowd. But we easily secured a table outside away from the masses (why would so many people eat inside on a perfect day amid a pandemic?) and proceeded to devour can’t-miss bar food. Get the wings with Alabama white sauce (vinegar based) and nachos. I also had one of the best frozen drinks ever - a Vietnamese coffee loaded with Tullamore Dew whiskey.

Day 5 was for exploring Mount Pleasant by bike, which is a bit of a harrowing thing to do. Most of the shops and restaurants are along a car corridor with 30 mph signs posted and cars in reality flying 55. That said, we did navigate by bike and some of the detours are much better with a bike in hand. We hit Vintage Coffee Cafe, which is connected to a pizza place called Coastal Crust and had the best avocado toast I’ve ever tried. Granted, I don’t eat that selection much, but it was very tasty, as were the Belgian waffles. Despite also not being on my list, Shem’s Creek Crab House looked like a better option for an early dinner, especially since it was a little off the main roads and had outdoor seating along the water. The peel-and-eat shrimp, raw oysters, and she-crab soup were all good.

And of course we stopped by for our last Huriyali on the way out of town for our 8-hour drive back home to Takoma Park, Md., which, incidentally, could use its own Huriyali. 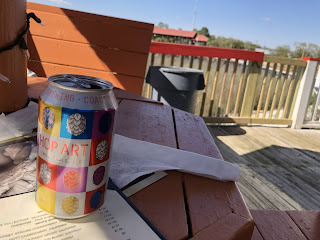 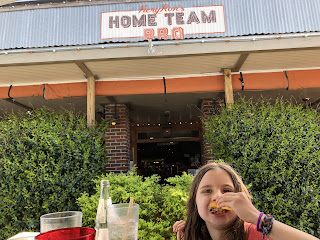 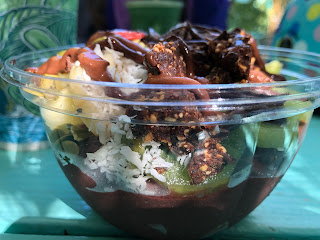 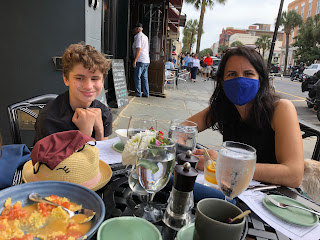 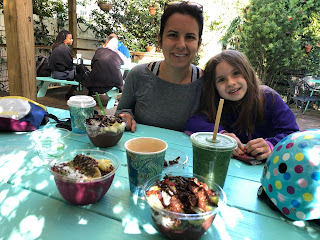 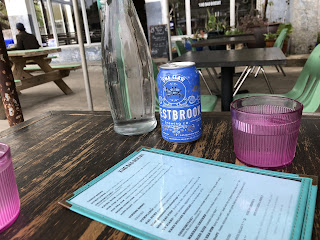