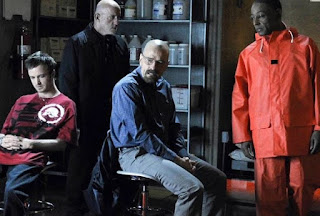 TV Show of the Month: Breaking Bad - Season 4 (Netflix): Like all seasons of this show so far, it’s flawless. Hank and Gus are cornering Walt and Jesse at every turn. The episodes in which Jesse and Gus visit the cartel in Mexico and the finale when Gus visits the old cartel boss in the nursing home are TV all-time classics. 5 out of 5 stars

True Detective - Season 1 (HBO Now): Matthew McConaughey and Woody Harrelson turn in perfect performances as Louisiana detectives hunting down the answers to a series of sadistic missing and dead person crimes. The show leaves behind a series of harrowing images and the tension and cameraderie between the two stars kept me on edge throughout. 5 out of 5 stars

Magazine Article of the Month: “Mysterious Suicide Cluster,” by D.T. Max in The New Yorker: a fascinating character study of Brandon Grossheim, who is accused in a civil case of talking numerous acquaintances at Missouri’s Truman State University into killing themselves. This is what magazine writing is supposed to be. 4.5 out of 5 stars

The Brady Bunch - Season 1 (Hulu): Not quite as great as later seasons, but this group had the formula pretty much perfect from the get go. Little kids Bobby and Cindy really shine, especially when they lose Tiger the dog and when Kitty Karry All the doll goes missing. 4.5 out of 5 stars

Outer Banks (Netflix): I wanted to watch this when it came out because I know the Outer Banks in North Carolina so well, but I think I didn’t hear great things about the show. And while it certainly isn’t much like OBX the actual place (and not filmed there and not including any OBX names or geographical landmarks), the coming-of-age story about the kids from the wrong side of the tracks battling the creepy rich kids is done really well. You can’t help but fall for the poor-kid Pogues in this young-adult mashup of Scooby Doo, Ozark, and Friday Night Lights. 4.5 out of 5 stars

Movie of the Month: The Jesus Rolls ((Showtime): John Turturro is of course mesmerizing in this sequel to the perfect Big Lebowski, but this one misses Jeff Bridges and much of the bowling storyline in exchange for a buddy-getting-out-of-prison road adventure with Bobby Cannavale. Still funny, but dark and weird too. 3.5 out of 5 stars

PEN15 - Season 1 (Hulu): The performances by thirty-somethings Maya Erskine and Anna Konkle as goofy schoolgirl besties are brilliant and many scenes are great additions to the classic TV comedy canon, but there are slow parts to deal with as well. Worth watching for a trip back to the awkward days of early high school. 3.5 out of 5 stars

Palm Springs (Hulu): I just can’t find the appeal in Andy Samberg. It’s not like I dislike him. He’s ok. But just ok. Kind of the same with his costar Cristin Miloti. This movie is throwaway junk - about the two stars getting stuck in a time loop where they can’t escape each other and maybe don’t want to - in the form of a less-good Adam Sandler ripoff that is also not so bad to sit back and enjoy. The best part is the Hall and Oates ending. 2.5 out of 5 stars