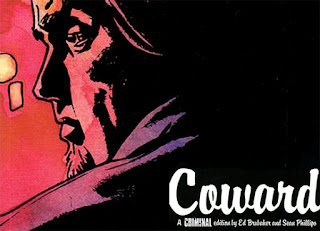 Graphic Novel of the Month: Criminal: Vol. 1, Coward: Ed Brubaker is my favorite graphic novelist that I’ve discovered this year. This is noir crime in which the antihero tries to save his girlfriend and her daughter and tries to get away with multiple scams. He’s not very good at any of it and the blood sprayed around is epic, but somehow there’s still a likable heart to the whole thing. Looking forward to reading more of this series. 4.5 out of 5 stars

Movie of the Month: Indiana Jones and the Lost Crusade (Pay Per View): Somehow I never saw this, the third installment of the Indy films. With a focus on Harrison Ford’s relationship with his father, played by Sean Connery, you really can’t go wrong. The laughs and the thrills are a mile a minute, as bumbling Nazis fall rapidly by the waysides. None of these movies will ever beat the original, Raiders of the Lost Ark, but this comes as close as can be expected, with a nice added touch of medieval lore thrown in for good measure. 4.5 out of 5 stars

Thelma and Louise (Sling TV): When Brad Pitt is the fourth or fifth best thing in a movie, you know you’ve you a good one. With the music of the Eagles leading them on a deadly girls road trip across the Southwest U.S., Susan Sarandon and Geena Davis kick some serious butt in the fight against idiot males. 4.5 out of 5 stars

Produced by George Martin (SlingTV): The story of the Beatles and the swinging 60s told through the eyes of a kid who got thrown into the role of head of Parlophone Records and really didn’t know much else but classical music is great. Martin's unique perspective was a cherry on the top (and maybe more) of the Fab Four’s cannon. 4.5 out of 5 stars

Weekend at Bernie’s (Hulu): Andrew McCarthy slums it with this nobody cast in what is actually a classic physical comedy from 1989 that I had somehow never seen. The goofiness is nonstop but it’s endearing and pretty funny. 4 out of 5 stars

All of Me (Sling TV): Steve Martin was my hero after The Jerk, his many Saturday Night Live guest appearances, his standup albums, Dead Men Don't Wear Plaid, and The Man With Two Brains, but I never saw many of his other movies. This one is as silly and ridiculous as it gets, but Martin and Lily Tomlin have great chemistry (they better, Tomlin dies and goes into his now almost-bipolar body). 4 out of 5 stars

Lethal Weapon (Sling TV): Long before Mel Gibson was outed as an anti-Semite, he was tough guy cop Riggs, a guy with a potential death wish after his wife dies. Gibson and Danny Glover get roughed up along the way to exterminating Gary Busey and his band of heroin kingpins in some fun action-adventure. 4 out of 5 stars

Friends: The Reunion (HBO Max): Considering I’ve only seen a dozen or so episodes of this show, you may wonder why I watched this. I don’t know the answer to that, but it strikes me that this is about like the show itself: relatively mindless drivel yet still compelling because of its ridiculously likable cast and perceived voices of a generation (although who would ever take Friends over Seinfeld, it probably goes without saying). 3 out of 5 stars

Posted by Pop Culture Lunch Box at 12:20 PM No comments: