The Pixies were obviously great, but they happened to hit at just the wrong time 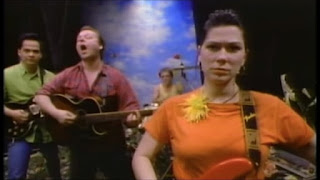 One strong theory for why the Pixies didn’t exactly catch on fire during the time of their short-lived initial existence is that music and listeners were in a funk during that time period - the hair-metal-at-its-end late 80s into the very early 90s.

In this classic Puncture Magazine interview with leader Black Francis, one of the articles in Now Is the Time to Invent!: Reports from the Indie-Rock Revolution, 1986-2000, he claims the band’s music derives from listening to so many regular rock records, which they did a lot more than actually playing their own instruments.

The surly Francis doesn’t appear to like a lot of things, including most rock journalists (other than Lester Bangs and the British press) and Sting, with his rock-star-helping-to-save-the-Amazon persona.

Things he does like include the thought of making a documentary about the sea monkeys in the Great Salt Lake and Neil Young, although he doesn’t have a lot of Young’s albums.

Other nuggets from the interview: