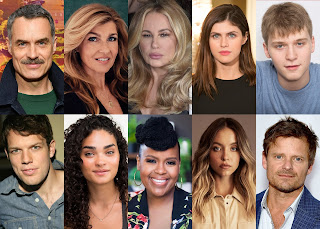 TV of the Month: The White Lotus - Season 1 (HBO Max): nobody has ever gotten into the mind of a beach resort as well as this show. Steve Zahn, Connie Britton, and Molly Shannon are the biggest names of a powerful ensemble that digs into the class warfare that happens when the layers of the onion are peeled at a Hawaii resort. Jennifer Coolidge of Mrs. Stifler American Pie fame needs to be guaranteed a bunch of awards as the loony, spacey older single woman, and Murray Bartlett plays the best hotel manager since John Cleese in Fawlty Towers, and is even clearly inspired by the master comic Cleese. It’s like an Agatha Christie novel if she included hilariousness and shocking sex in her oeuvre. 5 out of 5 stars

Novel of the Month (tie): Malibu Rising by Taylor Jenkins Reid: In any other month, this would be atop the pop-culture list by a mile. But this was an extraordinary pop-culture month. Reid’s follow up to her legendary Daisy Jones and the Six is likely her masterpiece. It centers on the biggest party of the year in Nina Riva’s cliff-side mansion but, in doing so, unveils the story of the Riva family through generations. Mick Riva is the centerpiece as the Frank Sinatra-like figure who has commitment issues with his wife June and their children. The kids - Nina, Jay, Hud, and Kat - are all surfers who make their way to the end of the story the best they can with the cards they’ve been dealt. 5 out of 5 stars

Novel of the Month (tie): The Final Girls by Riley Sager: This is the first of three horror-thriller books already out from someone who has already vaulted near the top of my favorite authors. A true page-turner that would make for the best film of the genre in years, it twists and turns through multiple mass killings, all of which have one thing in common: a lone survivor. The premise is perfect and the sociological commentary of our modern obsession with the news cycle and niche communities of people obsessed by some of those news stories and the characters involved is truly scary in real life, as it is in this fiction. I can’t wait to read Sager’s next two thrillers. 5 out of 5 stars

Outer Banks - Season 2 (Netflix): This heart-pounding young-adult-aimed show keeps satisfying as one of the best things on these days. The lower-class Pogues continue their quest to get back the gold that’s rightfully theirs, but the rich folks keep foiling them at every turn. The biggest cliffhanger yet leaves us waiting (probably for at least a year) at the end of the season’s final episode. 4.5 out of 5 stars

Bridge and Tunnel - Season 1 (Epix on Sling TV): Edward Burns was one of my favorite indie rom-com actors and directors in the 1990s. He's back now as the dad in this story of kids home from college in Long Island and trying to figure out what's next in life, possibly in nearby NYC. 4 out of 5 stars