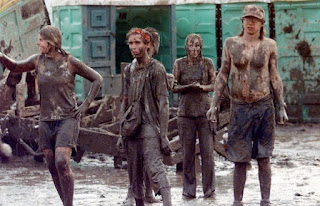 Movie of the Month: Woodstock ‘99 (HBO Max): Part of the (big) problem was that organizers were obsessed with not letting crowds break down fences to get in, as had happened at both previous Woodstock festivals, so they located it on an abandoned air-force base, not ironically either. The lineup was another main cause of trouble. Suffering a hangover from the good glory days of Nirvana, awful stuff like Korn, Kid Rock, and Limp Bizcuit aggravated an angry mob of white boys swamping around in sewage because of the abyssmyl water and sanitation situation. 4.5 out of 5 stars

Concert of the Month: Hall and Oates/Squeeze at Merriweather Post Pavilion: My first time seeing Squeeze and they broke out about six of their 10 or so great songs. The sound was crisp and clear. Here’s the set list. The headliners continue to alter a lot of their songs to be a little jammier, which I don’t like as much as when they play them straight. The first two times I saw them, they were immaculate. The last two, just really good. How can you complain about a mega-hit set list that throws some deep tracks from War Babies and Bigger Than Both of Us in right before ending with I Can’t Go For That (No Can Do), Rich Girl, Kiss On My List, Private Eyes, and You Make My Dreams. Here’s that set list. 4 out of 5 stars

The Hardy Boys - Season 1 (Hulu): An enjoyable romp of a twist and turn mystery that has beloved Frank and Joe Hardy searching for answers to their mother’s death, navigating a strange new family life in Bridgeport, and battling all kinds of bad guys, with the tall man being a favorite of the series. The complicated story line pays off for those who pay close attention and it will be interesting to see what the show runners come up with for Season 2. The spirit of the books, which I devoured as an early teen, is captured well. 4 out of 5 stars

A Walk in the Woods (Amazon Prime): This 2015 take on Bill Bryson’s classic book is perfectly cast, with Robert Redford as the crusty old Bryson, needing to shake up life a bit. His wife won’t let him hike the Appalachian Trail alone, so he hears from an old friend, classically played by Nick Nolte, who goes along with him, rekindling their once-soured relationship along the way. It’s a minor yet touching and funny buddy movie. 4 out of 5 stars

Graphic Novel of the Month: The Beauty (Vols. 1 and 2): This is a story about what would happen if people started catching a disease that made them beautiful. The first book is gripping but I started to lose interest as the story introduced a bunch of new characters in the second issue, without any real good sense yet of knowing how they fit in. Great premise helps earn it a 3 out of 5 star rating.

Barb and Star Go to Vista Del Mar (Hulu): Despite a few humorous moments, this is mostly an awful version of one of Adam Sandler’s worse offerings. The spy plot just doesn’t work with the middle-aged ladies’ stories. 1.5 out of 5 stars

Posted by Pop Culture Lunch Box at 6:44 PM No comments: