Yacht rock - a way of life - gets its own bible 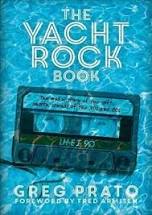 Comedian Fred Armisen leads off the must-have tome, The Yacht Rock Book: The Oral History of the Soft, Smooth Sounds of the 70s and 80s, by the prolific Greg Prato, with a foreword that claims “the feeling I get from hearing punk is similar to hearing yacht rock. It has a kind of aggressiveness to it because it’s so delicate.” Walter Egan probably more accurately notes that yacht rock grew out of a “more melodic version of The Beatles.”

Some of the interesting nuggets from the book include:

Most of the other artists interviewed in this oral history agree that they, unlike Oates, like the term yacht rock. I think it definitely describes a type of 1970s-80s well-produced rock abounding with hooks. There are probably around 100 songs that fit the tag and also are melodically undeniably great pop. I think Hall and Oates have dozens of great songs, but probably only a dozen or so hit the connection to yacht rock. But that still may make them the greatest yacht rockers of all.
Sail on, sailors, with this 5 out of 5 star essential book.
Posted by Pop Culture Lunch Box at 10:37 AM