How about some “fair and balanced” with these masked singers? 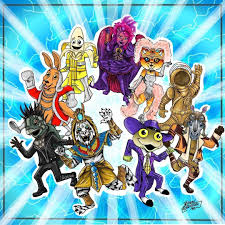 Many people in the heated worlds of social media and in conversation are questioning why a TV show would make Rudy Giuliani one of its stars? The show also starred Sarah Palin a while back.

I would add, why wouldn’t it?

It’s some mindless program called The Masked Singer. I watched 10 minutes of it once and it was painful to me, not my cup of tea. But to fans of it, it makes perfect sense that such a spectacle would seek guests who would enhance that spectacle.

Giuliani, the ex-mayor who used to say “9-11” every time someone questioned his morals or judgement, has fallen about as low as it gets. Even the large handful of people who believe his work as Trump’s lawyer and his direction of the January 6 Capitol takeover is righteous stuff have to admit that someone else in those roles could stand a pretty good chance of seeming less seedy. I mean, he’s like a very poor man’s version of the Wizard of Oz. Add glowing white, perfect fake teeth. Dripping hair dye. All around falling-apart-edness.

Not that anyone should be a judge based on his looks alone. But, I mean, did you see Giuliani in Borat? C’mon, the guy’s disgraceful and without morals. Can we all just agree on that, even though we mostly shouldn’t give it too much thought?

All that said, what I’ve written here should be totally unnecessary.

I’m not one to harken to the olden days, but remember when we all watched the same TV shows and read the same news sources? Then, people knew that the Vietnam War or JFK’s assassination or Watergate were the big deals they were because they had huge headlines on the front pages. Something like Giuliani on The Masked Singer would have appeared in a very tiny blurb deep in the entertainment section of the newspaper (maybe only in the TV Guide listings, remember those?). Same with Whoopi Goldberg’s misinformation about the Holocaust or the Wild West commentaries of Tucker Carlson and other TV non-newscasting entertainers of all political stripes.