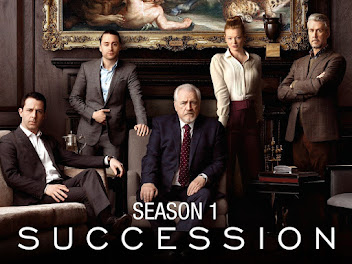 TV show of the month: Succession - Season 1 (HBO Max): The twists and turns of a despicable media-empire family modeled after Rupert Murdoch and Donald Trump is captivating. Who will do the next awful thing every 10 minutes? Exceptional character studies dot the landscape, with Brian Cox as patriarch Logan Roy, Jeremy Strong as son Kendall, Sarah Snook as daughter bride Shiv, Kieran Culkin as son Roman, and Matthew McFadyen as dufus corrupt son-in-law Tom. 4.5 out of 5 stars

Ted Lasso - Season 2 (Apple TV): This season may have been slightly less revolutionary that Season 1. That said, it was great and rolled on waves of interesting concepts, from the assistant coach’s lost evening to Nate’s (spoiler alert) journey to the dark side and Rebecca’s growing and interesting friendships. So glad there’s another season planned; this show needs to keep going to provide as many good vibes to the universe as possible. 4.5 out of 5 stars

Mare of Easttown (HBO Max): This crime drama takes place in seven episodes and underlines how important it is to stick with community, religion, and family. Kate Winslet is one of those actors you just can’t take your eyes off of, and she turns in one of her best performances as a depressed cop in a Pennsylvania town who is a crime-solving master and a town icon. 4.5 out of 5 stars

Movie of the month: Respect (Southwest Airlines): We need more great rock docs like this! There are so many stories - like this one about Aretha Franklin - that are perfect for this kind of treatment. Jennifer Hudson is award worthy as she belts out the hits and how they were inspired by the nurturing but sometimes difficult family and often psychotic men in ‘Re’s life. This is an essential tale of the still-ongoing civil rights era. Both fun and important, and certainly inspiring. 5 out of 5 stars

Novel of the Month: Mary Jane by Jessica Anya Blau: A girl from a waspy family gets a job babysitting for the Cones, a hippyish Jewish couple in their Baltimore neighborhood. When rock star Jimmy and movie star Sheba move in for the summer to get Jimmy psychoanalyzed by Dr. Cone to help cure his drug addiction, Mary Jane gets a very different kind of summer than she ever could have imagined. Put it this way, the lifestyle at the Cones' house does not jibe with the 1950s ideals of Mary Jane’s parents. Great drama and pop references, including a killer one of Casey Kasem’s American Top 40, my favorite radio show ever. 5 out of 5 stars 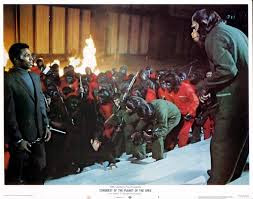 Conquest of the Planet of the Apes (1972) (YouTube Premium): This may be my second favorite of the original Ape movies. Caesar grows and, 20 years after landing on Earth, in the 1990s, he begins to get the apes held in captivity as slaves to understand that they can slowly begin to take over the humans. It was a shame to see carnival leader Ricardo Montalban fall out of a skyscraper, but the takeover in an eerie government complex makes for a gripping tale. 4.5 out of 5 stars

Escape from the Planet of the Apes (1971) (YouTube Premium): The third in the original series sees Cornelius and Zira landing in a spaceship 2000 years earlier back on Earth. The human leaders realize they have come from a future in which humans have ruined themselves and are ruled by apes. (Spoiler) Our beloved chimps don’t make it out alive but they do leave little Milo/Caesar. 4.5 out of 5 stars

Beneath the Planet of the Apes (1970) (Amazon Prime): The second of the original five-film series is the weirdest of the batch, as the apes (spoiler alert) kill off Taylor, Nova, and Brent after they discover a nuclear bomb-worshipping society living in the remains of New York City's subway system. (Luckily this storyline comes back in the fifth movie to better explain what this society is all about and how they turned into monsters from the nuclear fallout and living undergorund for so many years.) The leader of the gorilla army also appears to die. Taylor pulls the nuclear lever at the end, making it a mystery as to how there will be three more films in the series, plus a whole new series in the 2000s. 4 out of 5 stars

Spider-Man: No Way Home (first time in a movie theater in two years): A captivating third part in the series that has Spidey (plus two other Spidey’s) working to get a host of bad guys of previous movies back to their respective universes. A little confusing and nonsensical in plot, but a popcorn movie to sit back and enjoy, somewhat brain dead-edly. 4 out of 5 stars

Maid (Netflix): I watched this because lead Alex (Margaret Qualley) was so intriguing as one of Manson’s girls in Tarantino's Once Upon a Time in Hollywood. She is a powerhouse of facial expression in this drama, which is all about spouse abuse and mental illness. Pretty heavy stuff but in a can’t-look-away style. Andie McDowell is also great as Alex’s mother. 4 out of 5 stars

Nonfiction of the Month: Uncomfortable Conversations with a Black Man by Emmanuel Acho: The former NFL player presents a breezy argument for why conversations about race and equity need to happen. He uses pop-culture references to highlight past injustices to Black people and provides a practical way forward to talking more openly about racism. 4 out of 5 stars

Cry Macho (HBO Max): A minor little movie for a major actor in Clint Eastwood. Now in his 90s, he’s still a badass as a Texas cowboy on a mission to bring a teen back from his lousy mother in Mexico to his dad back in the States. Clint finds love, thugs, and hurt animals to care for (not to mention their pet, Macho the rooster), in a bit of a mess of a story but with likable characters nonetheless. 3 out of 5 stars

Tiger King: The Doc Antle Story (Netflix): The shock value of animal cruelty mixed with the jaw-dropping puniness of Joe Exotic made the original Tiger King a surprisingly compelling hit. But this throwaway three-episode sequel features hangers on-ers who have zero redeeming value and, worse, are uninteresting. Who cares? 1 out of 5 stars

Not my thing: Acapulco on Apple TV and Jersey Shore on Hulu.