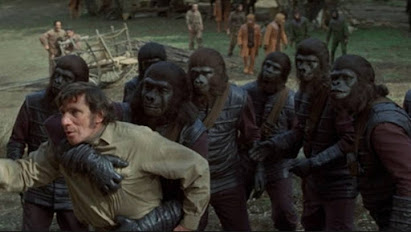 Movie of the month: Battle for the Planet of the Apes (YouTubePremium): The final chapter of the first five Planet movies shows the origin of the bomb monster people who were so confounding in the second film (Beneath the Planet of the Apes). And the battle between the humans and the gorillas and the chimps (and even the orangutans) and the bomb society begins in earnest. A great ending to a great series of sociological studies. 5 out of 5 stars

The Silence of the Lambs (Amazon TV): Hard to believe it had been 30 years since I saw this slow creeper, but by the end of the film, the trio of Clarise Starling, Buffalo Bill, and Dr. Hannibal Lecter are spinning a minuet that is sure to leave at least one of them grotesquely dead. Not exactly horror, but horrifying nonetheless. 4.5 out of 5 stars

To Catch a Thief (Sling TV): Probably only my sixth or seventh favorite Alfred Hitchcock movie, it was heartening to see my 14-year-old son really enjoy this cinematographic masterpiece, with the also masterful Cary Grant leading the search for a cat burglar/jewel thief all around Cannes and the majestic South of France. 4.5 out of 5 stars

Rise of the Planet of the Apes (Sling TV): This 2011 installment is really the first of the modern series. Little Caesar grows up in the suburbs with “father” James Franco, who is working to create an Alzheimer’s drug that seems to work on his dad, played by John Lithgow, and makes Caesar and the apes he joins at a shelter smarter, more powerful, and in a place where they can rise up on the Golden Gate Bridge and into the Redwoods. As the storyline sets into place for the series, we see a virus created by the initial spread of the drug start to spread across the globe. 4.5 out of 5 stars 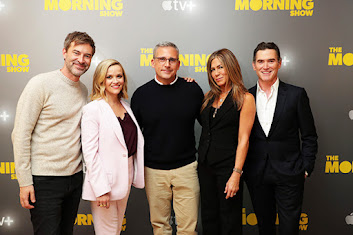 TV Show of the Month: The Morning Show - Season 1 (Apple TV+): A highly watchable show, with backstabbing galore from Jennifer Aniston, Steve Carell, Mark Duplass, Reese Witherspoon, and Billy Crudup that devolves a bit into soap opera towards the end. Those actor are each compelling enough that the next season should provide more unlikely high jinx from a bunch of actors 4 out of 5 stars

Planet of the Apes (Sling TV): This film is kind of a retelling of the 1969 original. It stars Mark Wahlberg as the astronaut who’s trying to find his recovered spaceship after landing on a planet filled with apes. While it’s an enjoyable movie done with creativity by Director Tom Burton, it doesn’t truly fit anywhere into the original series or the new series of films. 4 out of 5 stars

The Terminal (Sling TV): Tom Hanks plays a man whose Eastern European country goes to war as he lands in New York. Catherine Zeta-Jones plays a flight attendant and Stanley Tucci is the squirrelly head of airport operations in an endearing and epic tale of being stuck in an airpot for a very long time. Directed by Steven Spielberg. 4 out of 5 stars

I Want You Back (Amazon Prime): There has been a dearth of rom-come in my life, I realized, when I saw this. The ensemble cast stars Jenny Slate and Charlie Day attempting to break up their exes, Scott Eastwood and Gina Rodriguez, from their new partners so that they’ll be able to get back together. The movie luckily shies away from an easy-way-out ending, after a disastrous climax at a wedding on a boat in Savannah. The Good Place’s Manny Jacinto is hilarious as the odd-man out. 3.5 out of 5 stars

Mixtape (Netflix): In yet another tale of a kid attenpting to piece together the lives of her dead parents, this one predictably has a girl discovering a mixtape shared between her parents and attenpting to understand them better through the songs they loved. Harmless, incidental, and enjoyable enough to watch with the kids. 3 out of 5 stars

Novel of the Month: Fates and Furies by Lauren Groff: I should have known better than to waste the better part of 6 weeks slogging through this heavily praised work. Especially after my review back in 2016 of Groff’s Arcadia. The concept of Fates is brilliant but the execution is too much. The first half tells the near perfect bohemian relationship and marriage of playwright Lotto and his muse Mathilde. The second half switches from his perspective to hers and we learn that things were far from perfect underneath the sheen: she had been a prostitute, she had killed her baby brother, his mom refused to ever meet her, he had impregnated a girl who then got an abortion and killed herself. There, that’s the story. Thank me for saving you 6 weeks of your life. 2 out of 5 stars