Is Apple TV worth keeping? Here's my test

A couple of weeks ago, I had a rare night at home with nobody but Rico, my shin tzu. And he agreed with me that we should more fully explore Apple TV. This is a streaming service that definitely has some quality material, like 1971, Ted Lasso, and The Morning Show. But it’s on the chopping block.

We have too many services and really don’t watch TV much. So I thought I would look at my list of what I want to check out on Apple and watch 10 to 15 minutes of the start of everything (since I’ll never actually watch everything I want to by going one by one). Here's what happened (even though it actually ended up taking us more than one night).

First up, The Greatest Beer Run Ever (movie): This seems like a pretty enjoyable, but potentially overly melodramatic, addition to the “should I or shouldn’t I support the Vietnam War” genre. With Zac Efron and bartender Bill Murray hatching an anti-hippie scheme to help the military overseas.

On the Rocks (movie): Bill Murray again. Although he doesn’t appear (other than voice) early on, you know he’s going to appear as the "a lot-to handle but zen- like" dad. Rashida Jones is struggling in a marriage with a workaholic cutie who is likely having an affair. It’s all running her down. This is a little slow but I’m intrigued to find out her way out of this. 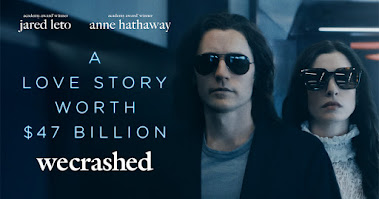 We Crashed (limited series): This is the best so far and I want to keep watching Jared Leto as a weird Israeli “serial entrepreneur” who bumps into Ann Hathaway on their way to becoming billionaires. Very intrigued by the one, as Leto is an under-appreciated great. You can smell the crash approaching from a mile away.

CODA (movie): This might just be worth all the hype. A girl who can hear living with a family that only uses sign language is a recipe for rebellion, and I’m in. Can’t wait to finish this. Tops on this list.

Cha Cha Real Smooth (movie): I didn’t know what this was at all for the first 10 minutes, and then the groove kicked in with an hilarious cuteness from Dakota Johnson (she’s becoming an impressive actor) and a powerhouse comedic cast clearly in the wings. I will definitely finish this with gusto.

The Afterparty (movie): This Tiffany Hadish vehicle is a fun romp through an Agatha Christie truism to solve the mysterious death of a celebrity, and making sure every last suspect at the party tells their sides of the homicidal story. I might get back to this but it’s lower in this list in terms of priority.

Lisey’s Story (limited series): I’m wild about Stephen King books but often they don’t translate to the screen for me. The wild world the books create in my brain often miss my mark when someone else is telling me what the world is supposed to look like. This interpretation with the wonderful Julianne Moore at the center as Lisey, the wife of a famous and slain “national treasure” of a writer, is freaky, unsettling, and probably well worth watching in full.

Home Before Dark (2 seasons): This is about a nine-year-old girl driven to the truth in her journalism career. Her spirit, as her family moves from the city to a small town, is entwined with her ex-journalist dad. And by the end of the first episode, I realized I should be watching this with my own nine-year-old daughter. I would be very proud if she turned into a journalist, despite the low pay, like me.

The Shrink Next Door (limited series?): It must be a limited series because it’s so bad that it couldn’t possibly come back. Seemingly can’t miss with Will Ferrell, Paul Rudd, and Kathryn Hahn, perhaps the last episodes redeem it, but the handful I watched were one of the worst things I’ve ever tried to sit through.

Servant (3 seasons): I landed on this one and it was the clear winner of the TV shows. I binged the whole first season (there are three total, and maybe more on the way?). It's a slow burn creeper about a girl who comes to help a wealthy couple in their Philadelphia rowhouse. They have recently suffered a baby-related tragedy, but ain't seen nothin' yet. You never see all the twists and turns coming, and Rupert Grint is particularly great as the wine-swilling brother/fixer.

Apple may not be on the chopping block after all.