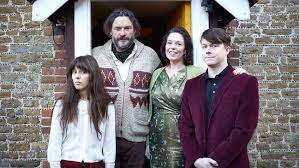 TV Show of the Month: Flowers - Season 1 (has now left Netflix): This nutso British ensemble comedy is led by Olivia Colman. It explores a rural family whose formerly successful writer patriarch has fallen into a deep depression, and the startling dysfunction all around probably is not a huge help. I fell in love with these weirdos, including their visiting Japanese artist-in-residence. I don’t know what I’ll do now that the second season is proving hard to find. 4.5 out of 5 stars

Fleishmann is in Trouble (Hulu): The sadness and depression lingers and stays in this adaptation of a novel I read a couple years ago. It envisions the book’s storyline well, and you can’t keep your eyes off Jesse Eisenberg, whose life continually gets invaded by his kids, his missing wife, his hospital co-workers, and his online dates throughout this one-and-only-season arc. 4 out of 4 stars 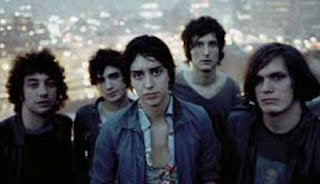 Documentary of the Month: Meet Me in the Bathroom (Showtime): A nice reminiscence of the early 2000s in New York City, when the rock scene was ruled by The Strokes, Yeah Yeah Yeahs, LCD Soundsystem, and Interpol. There is also a dark underbelly, with 9/11 ever present and Napster and the new era of pirated and streaming music looming. Since I never got around to reading Lizzy Gordon's book, this is a good happy medium. 4 out of 4 stars

Movie of the Month: Emily the Criminal (Netflix): A series of unfortunate job-related failures lead Aubrey Plaza down a different kind of employment path. She finally finds something she's good at. 4 out of 5 stars

American Underdog (Southwest Airlines): This is incapable of being a bad movie. Not only was I a huge St. Louis Rams fan before they moved back to L.A. (I even still, improbably, like them), but the Kurt Warner story from rags to riches and Hall of Famer is just such a good tale. While the movies slips into melodrama a bit too often, it is still well done and very well acted. 4 out of 5 stars

The Craft (HBO Max): This always ranked pretty highly among my favorite 1990s movies. It’s no cinema verite but it certainly is entertaining to watch with a 15-year-old son whose favorite genre is horror. It’s kind of Beverly Hills 90210: Witch Version, as four L.A. high-school girls get pretty deep into witchcraft, with some escaping relatively unscathed and some not. 4 out of 5 stars

Starship Troopers (Sling TV): The 1997 spoofy movie based off the Robert Heinlein classic novel follows a trio of friends on their path from "civilians" to "citizens," excelling as a military psychic/scientist, battlefield commander, and pilot. Their mission is to beat back a planet of bugs, led by a massive “brain bug.” If you go in accepting the ridiculousness, Troopers is entertaining and well done, and, after a poor box-office opening, has gone on to be considered a classic. 4 out of 5 stars

"China" (short story by Charles Johnson, 1984): A married couple in their 50s (but seemingly much older) have both lost their zest for life. The postman husband sees a kung-fu movie and begins buying fighting accessories and training. He loses his paunch and becomes a different person, whom his wife doesn’t particularly like. It is a tale of becoming something you never thought you could be. 4 out of 5 stars

Me Time (Netflix): People always tell me I’ve got to watch Kevin Hart movies and, every time I do, I’m underwhelmed. He is definitely a lovable guy, and his movies are likable, but they also seem like kind of a mess. The same is true of this ridiculous buddy movie with Mark Wahlberg. The story? I’m not really sure, but it’s something to do with stay-at-home dad Hart agreeing with his wife that it’s time for him to finally have some me time. Nuttiness ensues. Enjoyable enough, but seems it could have been funnier. 3 out of 5 stars